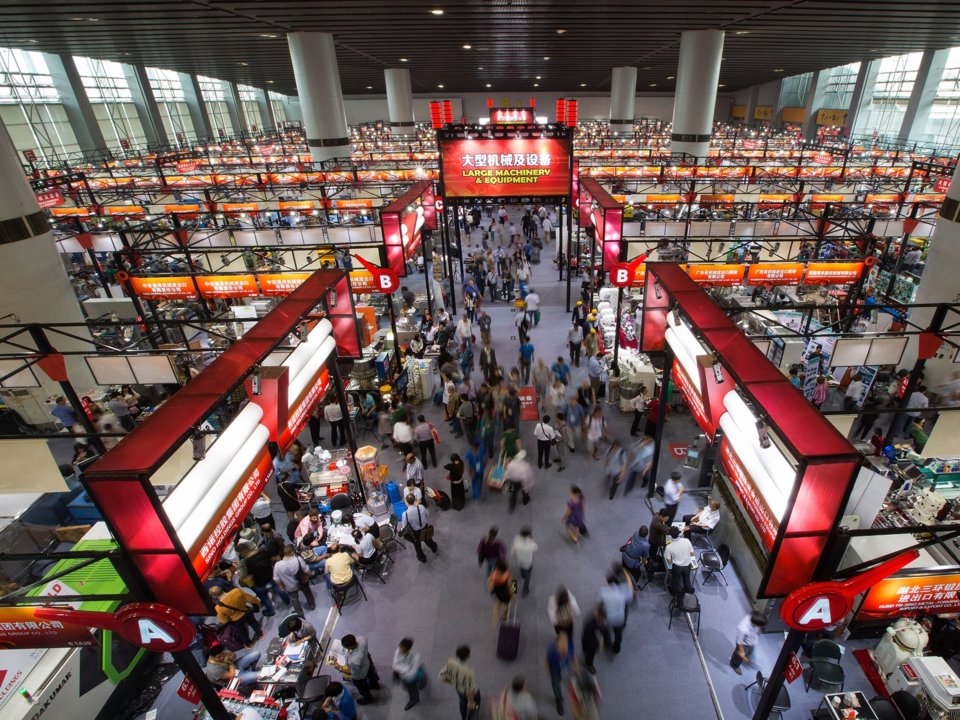 China’s largest trade fair is the size of 71 Walmart Supercenters, where buyers go to stock the world’s shelves with toys, TVs, and toilets — here’s what it’s like

The China Import and Export Fair, also known as the Canton Fair, is the country’s largest trade exhibition.

The fair began in 1953 and is now held twice a year in autumn and spring in Guangzhou, a port city near Hong Kong.

Exhibitors and buyers come from all around the world to do deals on more than 150,000 different types of products, including consumer goods, textiles, decorations, medicine, electronics, and machinery.

By the end of each fair, deals worth tens of billions of dollars will have been inked.

This year’s Canton Fair began on April 15 and will run until May.

This is what the experience will look like for the hundreds of thousands of buyers who have descended uponGuangzhou.

This year’s Canton Fair will feature 60,475 booths and take up a total of 1.185 million square meters — that’s the size of 71 Walmart Supercenters.

Some buyers come with a tour company, while others book their own travel for which airlines and hotel chains aggressively market their services.

There are 704 guest rooms at the Shangri-La Hotel adjacent to the Guangzhou International Convention and Exhibition Center.

Those who need to travel to the fair have to deal with scalpers who have hoarded tickets and resell them at a markup of 250%.

Because of the large number of attendees, health precautions have been taken in the past. In 2014, people had their temperatures checked before entering the fair to prevent the spread of Ebola.

Sometimes health outbreaks are good for business. In 2009, the H1N1 caused interest in health items at the fair to surge.

Inside the exhibition buyers can find pretty much anything they could ever want.

There are plenty of plastic toys …

And novelty items, such as this foldable keyboard.

There’s also an official e-commerce platform. This metal fidget spinner costs $2.50 and the factory has the capacity to make 88 million of them a month.

There are TV screens everywhere.

And all types of vehicles.

This booth specializes in police and ambulance lights.

Industrial equipment is also popular. From clamps and chains …

Suitcases are of course popular.

So, too, are pipes, apparently.

Buyers can stock up on Christmas decorations…

Everything is for sale.

Even the kitchen sink.

Demonstrations are common, and sellers use everything from mechanical dinosaurs and palm trees to mimes and dance troupes to catch a buyer’s eye.

But space comes at a premium.

Buying all day can make you hungry, but sometimes there’s not enough seating — so you improvise.

Like an airport, a select few have access to VIP clubs. These clubs can offer buffet restaurants, lunch and coffee coupons, meetings with foreign-affairs officials, and “exquisite gifts.”

Outside the exhibition, amateur translators and interpreters offer their services.

Some companies recommend bringing two sets of business cards. One with professional contact details, and another with just a name, title, and website so you don’t get inundated inquiries after the fair ends.

Many buyers sit down with sellers to discuss their needs.

Others take notes as they go.

These days, Amazon sellers visiting the Canton Fair are even hosting their own meet-ups on the sidelines.

Canton Fair is considered a barometer of China’s foreign trade, and some exporters are currently considering reducing exports to the US.

But for the most part, attendees at Canton Fair aren’t concerned about a trade war between the US and China.

“The thunder is very loud,” Stephen Chow, a senior manager at Provision, a flat-screen television maker from Guangzhou, told Reuters. “But the raindrops may be very small.”

Many Thanks To The Visitors Who Came Today at Sunchine Inspection Booth – Apr 16, 2018

Some Photos Of The Visitors Who Came Today at Sunchine Inspection Booth – Apr 18, 2018